The person wearing the Liar mask in the original photo for the Self-Titled album is not Chris nor Brandon, but old Slipknot tech/roadie Anthony ‘Satone’ Stevens. Chris was later photoshopped over the original for the final album cover.

Anthony and Paul in the"Spit It Out" video 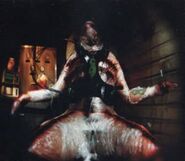 Anthony wrapped up in cellophane and painted all sick, for the inside tray card of the self titled cd

Anthony Stevens wearing the liar mask, with the band

Anthony Stevens
Add a photo to this gallery

•He is one of the singers of Downthesun.

•He drank piss for a hundred bucks, then puked and drank it again for an additional 75 bucks.

Retrieved from "https://slipknot.fandom.com/wiki/Anthony_Stevens?oldid=9235"
Community content is available under CC-BY-SA unless otherwise noted.